In response to COVID-19, the global medical community has devoted unprecedented resources to the development of new vaccines and treatments. These initiatives are necessary and laudable; yet, as researchers and public health officials divert attention to the pandemic, they risk overlooking other pressing health challenges, such as diabetes, depression or the tobacco epidemic. While these health crises may lack the pizazz of a novel virus, their neglect could exacerbate the effects of this pandemic and others to come. 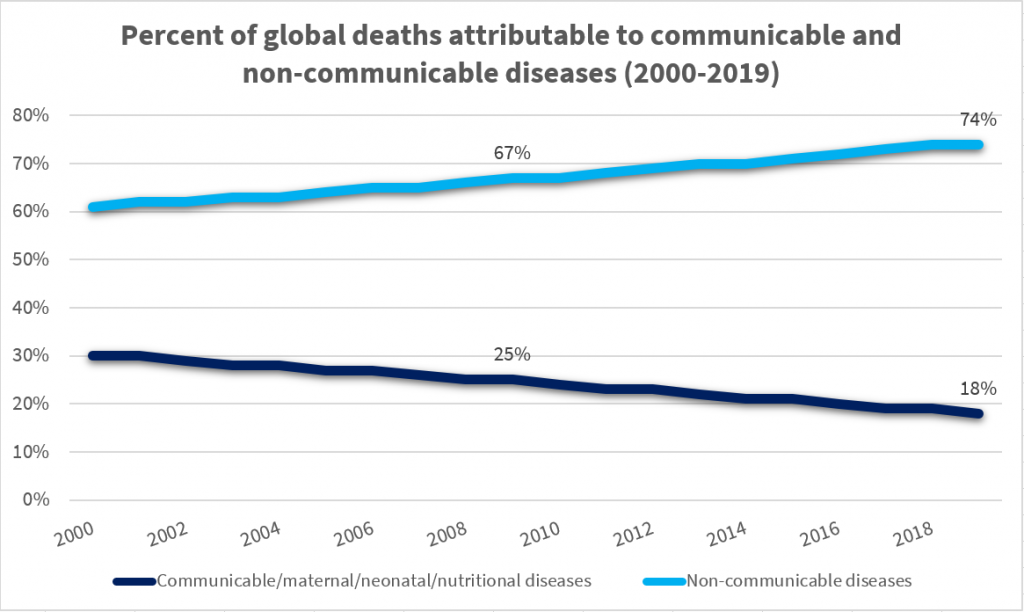 Communicable diseases spread quickly, and sometimes dramatically, leaving fear and devastation in their wake. Non-communicable diseases (NCDs), by contrast, don’t arrive in “spikes” or panic-inducing “waves.”  Rather, they strike quietly and persistently. They often fail to capture the world’s attention, but nonetheless account for the majority of its deaths. Inclusive of conditions like cancer, diabetes, chronic respiratory disease, and cardiovascular diseases (CVDs), NCDs were responsible for over 74% of global deaths in 2019. As Richard Haas has recently described, neglect of these conditions can imperil national health and national economies. Yet, governments and global health organizations often fail to prioritize their prevention: “NCDs lack the urgency or the sense of crisis associated with infectious disease outbreaks,” he writes, “and thus it is more difficult to galvanize a response to them.”

Our vulnerability to COVID-19 derives, in part, from our ongoing failure to adequately control NCDs. In addition to being deadly in their own right, these chronic conditions can predispose people to complications from viral infections. A body is best equipped to fight off disease when it is otherwise healthy. Similarly, national healthcare systems are best equipped to control an emergent virus when the prevalence of NCDs is low. Further, whereas pandemics are difficult to predict or prevent, there exists an abundance of evidence on how to reduce NCDs.

The WHO has noted, for example, that the prevalence of leading NCDs could be dramatically reduced by targeting behavioral risk factors, such as physical inactivity and unhealthy diet, as well as alcohol and tobacco use. And while altering human behavior is admittedly difficult, health officials can take steps to tip the scales in the right direction—particularly when it comes to combatting the many diseases associated with combustible tobacco.

Here, a telling case study comes from Sweden. For years, the country has maintained the lowest smoking rate in the European Union (EU), at around 5 percent of the population. Not coincidentally, Sweden is the only country in the EU to legalize snus, a form of smokeless tobacco associated with reduced health risk due to its lower levels of harmful chemicals, as compared to combustible tobacco. Snus has been popular in Sweden for decades, particularly among men (about 19% of whom use the product). As a result, the country also boasts the lowest rates of male deaths from tobacco-related cancers and CVDs.

Sweden’s success serves as proof of concept for a harm reduction approach to curbing the tobacco epidemic. Perhaps recognizing as much, the FDA recently authorized the marketing of snus as a “modified-risk tobacco product;” and snus has been cited to bolster arguments in favor of other tobacco harm reduction products, such as e-cigarettes. No doubt, asking citizens to change their habits around tobacco, alcohol, or diet presents a huge challenge. But Sweden’s case indicates that it can be done and that the health benefits are significant.

While the danger of smoking is hardly news, COVID-19 offers a novel way to understand the importance of tackling this epidemic, and more broadly, of reducing NCDs. For example, recent research has found that obesity is a serious risk factor for COVID-19. Further, individuals with a range of NCDs may be particularly vulnerable to the ill-effects of lockdown, such as reductions in physical activity, vitamin D levels, medication adherence, and physician visits. Indeed, barriers to proper NCD management during this time may yield health challenges that persist long after the pandemic has subsided. As such, COVID-19 should not serve as an excuse to neglect NCDs, but instead should re-energize efforts to curb them.

COVID-19 is new and much remains unknown. Given as much, one can be forgiven for affording the pandemic high levels of attention and anxiety. With respect to global biomedical resources, however, we must be motivated not by fear, but by long-term public health goals—including and especially the prevention of NCDs.