Posted by derek yach on Wednesday, October 16, 2019 in Research 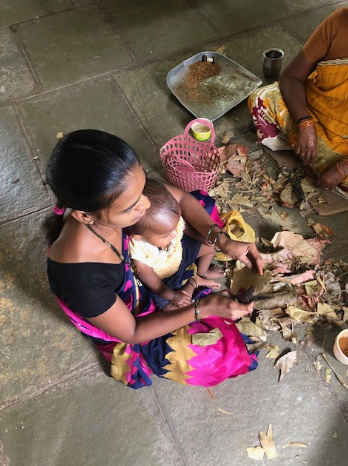 Surveying the room in Solapur, I’m struck first by the elegance of the women’s saris, and second, by the iPad. Equipped with advanced facial recognition software, the machine’s sophistication stands in stark contrast to the rest of the scene, which otherwise comprises piles of tendu leaves, processed tobacco, thread, and perilously sharp sheers. Over the course of the day, I am told, each woman will be expected to use these components to produce 1,000 hand-rolled cigarettes, known as bidis. If a roller fails to meet her quota, the iPad will take note.

In towns and cities throughout India, this scene is commonplace. The country’s most popular form of combustible tobacco, bidi is used by 75 to 100 million people, who smoke 500 billion sticks annually. As such, bidis are an enormous, if somewhat murky, industry. Like cigarettes, they are linked to all manner of health hazards, including lung cancer, cardiovascular disease, and increased risk of tuberculosis. And those rolling bidis face risks of their own: ambient tobacco can damage workers’ eyes and lungs—to say nothing of the aches and postural issues incurred as a byproduct of repetitive physical labor.

Yet, for many of these women, bidi rolling is the best and only way to make a living. To supplement the meager wages earned in this job, some rollers also engage in sex work—another dangerous occupation that suggests a scarcity of employment options.

During a visit to Solapur last month, I had an opportunity to briefly chat with groups of bidi rollers. I learned that, for many of them, days consist of rolling tobacco while simultaneously chewing a range of toxic smokeless tobacco products. They know that this habit comes with a risk of serious diseases, including and especially oral cancers; but nicotine is an effective stimulant and, they say, it helps them charge through a long day of menial work. The experience of these women underscores the complicated ways in which tobacco is enmeshed in the lives of many Indian people—particularly those living in poverty.

The women I met provided visual evidence of the deep entanglement of tobacco production, manufacture, and use.

Though my visit was informative, I left with a preponderance of questions, the most fundamental being: How can we reduce bidi smoking in India without destroying the livelihoods of those currently dependent on the industry?

In contemplating this question, we are faced with two truths: (1) bidi is use is responsible for a huge number of deaths and diseases in India; and (2) people in many communities rely on bidi work to sustain themselves and their families. The confluence of these two facts amounts to a wicked problem: “a social or cultural problem that is difficult or impossible to solve for as many as four reasons: incomplete or contradictory knowledge, the number of people and opinions involved, the large economic burden, and the interconnected nature of these problems with other problems.”

There is no obvious solution to India’s wicked bidi problem. However, there are certainly steps that we can take to better understand its myriad components. Indeed, we must resist the temptation to prescribe simple remedies until we develop a rich, evidence-based understanding of bidi production and consumption, and of India’s tobacco ecosystem at large.

Often, a “tobacco problem” is taken to mean a “cigarette problem.” Yet, if all the cigarettes in India suddenly evaporated into thin air, its massive tobacco problem would hardly be solved. Cigarettes proper account for only 10 percent of the country’s tobacco consumption; use of bidis, and particularly smokeless tobacco, is far more prevalent. Yet, bafflingly, cigarettes remain the prime target of the country’s tobacco policies.

For example, the government regularly raises taxes on cigarettes, which only serves to ensure that those living in poverty continue using bidis. Here, it is evident that a one-size-fits-all approach to tobacco control does not work. Indeed, while in Solapur I was confronted with the harsh reality that many of our current tobacco strategies are not up to the task. The WHO Framework Convention on Tobacco Control, for instance, inadequately considers how to adapt recommendations to the complexities of India and other countries where tobacco problems are similarly wicked.

To enact meaningful change—in India and beyond—we must start not by delivering top-down proclamations, but by listening. We must listen to data emerging from the field, and to the voices of people most affected by tobacco.