Hierarchy of Harm Reduction Disagreement - Foundation for a Smoke-Free World

Before 2020, I knew very little about tobacco control. My knowledge did not go beyond what most people know – that cigarettes are bad for your health and could kill you. Subsequently, tobacco harm reduction was a foreign concept to me, although it made logical sense. I volunteered in Lesotho with the Peace Corps; the idea of harm reduction was often used when referring to the HIV/AIDS crisis. Although I did not know much about tobacco control, I was aware that harm reduction had been proven to work in other fields of public health. I joined the Foundation for a Smoke-Free World to help with its mission to end smoking in this generation, despite knowing that advocating harm reduction almost always entails some controversy.

As someone who was wading into a discussion that is not in my area of expertise, I paid close attention to the arguments against the Foundation’s mission of harm reduction. I noticed that most of the arguments amounted to obstructionist scientific sophistry. I was reminded of Graham’s Hierarchy of Disagreement from a college communications course and began categorizing the arguments I found online in a graphic (see below). I quickly discovered that advanced disagreements were hard to find, and most arguments were ad hominem or contradictions (with no supporting evidence). 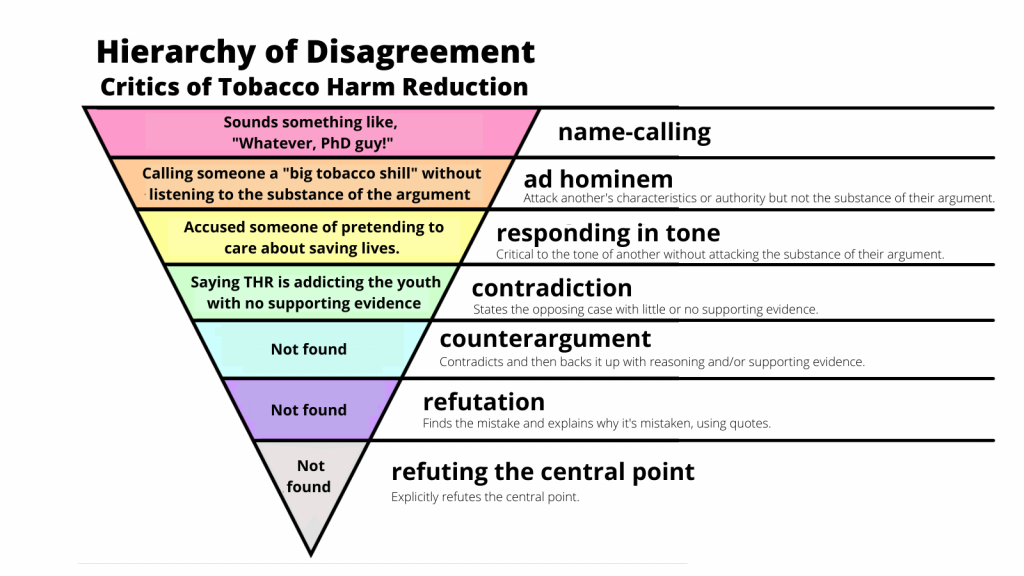 That is not to say there should not be room for skepticism and disagreement. We should be debating all the tobacco control issues, like the dangers of youth vaping, or the cause of the EVALI crisis. But the hallmark of obstructionist thinking is that the proponents do not update their stance when properly challenged with facts. They just move on to the next argument without an acknowledgment. I always thought that science was based on data, and if the data conflict with a world view, then the point of conflict should be acknowledged, tested and retested.

Organizations like Parents Against Vaping and the Campaign for Tobacco-Free Kids (CTFK) have consistently brought up the same arguments about harm reduction. The Foundation is transparent that it is funded by PMI Global Services, but that fact is being used to disqualify potentially lifesaving research conducted by scientists. The idea that data are disqualified without review intuitively feels irresponsible and cowardly. I would like to see Bloomberg-funded organizations like CTFK really pour through the content of our research and review the evidence in a civil scientific discussion. The Foundation would welcome public debates where tobacco control strategy is discussed maturely and constructively with all experts. We are all looking for a path to truth regarding tobacco control, and the stakes are too high to not follow every lead.

There really is no choice but to debate these issues. Human beings are at risk if we do not. Even the loss of one person devastates a family; it is hard for me to imagine all the people who will be needlessly harmed because tobacco control experts are not following all the available evidence.

CTFK and Bloomberg, more and more people are noticing your neglect. Let’s talk.