Posted by romita shah on Thursday, September 26, 2019 in Agriculture 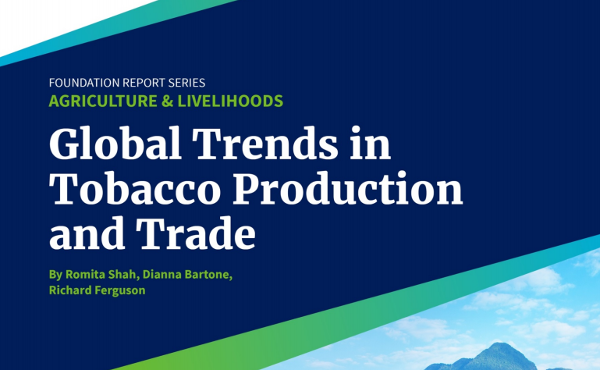 Over the past two decades, global patterns in tobacco production and trade have shifted dramatically. Considerable research has gone into detailing these shifts, elucidating their drivers, and understanding their implications for tobacco control. One area of research that remains relatively unexplored, however, is how these changes have altered the global flow of tobacco and the associated implications for tobacco control. The Foundation’s report on global trends in tobacco production and trade represents our first step toward understanding the global flow of tobacco and what it may mean for our efforts to create a smoke-free world.

When it comes to the quantity of global tobacco production, the report finds that little has changed—at least at first glance. The amount of tobacco being produced over the past two decades has had its peaks and troughs but there is no obvious or discernible trend in the amount being produced. A more detailed analysis, however, reveals that the bulk of tobacco production has shifted from high-income countries in Europe and North America to low- and middle-income countries in Africa, Asia, and South America. Brazil, China, India, and the United States have been the world’s top producers of tobacco during this time, but production has notably decreased in the United States, allowing the major emerging economies of Brazil, China, and India to become the dominant players in unmanufactured tobacco production. Collectively, these three countries now produce almost two-thirds of the world’s supply of tobacco leaf.

Interestingly, the report indicates that these regional shifts in production are reflected in the global flow of tobacco: Brazil, China, and India now play an outsized role in the export of unmanufactured tobacco. A country-level analysis also reveals that while Brazil exports the majority of its production, China and India do not. This finding suggests that China and India have captured a significant portion of the tobacco value chain–including the capability to produce products like cigarettes from raw tobacco leaf– likely to meet the demand of their large domestic consumer bases. Moreover, trade between Brazil and China are increasing, perhaps representing a harbinger of increased tobacco trade between low- and middle-income countries in the years ahead.

Conversely, high-income countries in North America and Europe have generally remained top importers of unmanufactured tobacco. Notably, Belgium-Luxembourg ranked as the number one importer and number six exporter of unmanufactured tobacco. The drivers behind this growth are likely to be complex, ranging from the strategic attractiveness of the port of Antwerp to transit facilities developed following the creation of the European Union.