Historically, menthol cigarette consumption across the European Union (EU) has represented approximately 5% of total cigarette consumption by volume, with Poland having the highest prevalence. This product class generates regulatory attention due to the assumption that flavors, including menthol, encourage the uptake of smoking.

On May 20th of last year, the EU ban on the manufacture and sale of menthol cigarettes went into effect for the Union’s 27 member countries. This regulatory move was predicated on the view that such a ban would discourage people from starting smoking or encourage them to quit—thus contributing to general public health.

To evaluate the validity of this supposition, the Foundation sponsored surveys of adult menthol cigarette smokers in eight EU countries before and after the menthol cigarette ban. The pre-ban surveys queried awareness and intention to quit or switch. In light of COVID-19, the surveys also monitored behavioral changes among adult tobacco users as a result of the pandemic. The post-ban surveys queried actual behavior.

According to the surveys, the menthol cigarette ban has resulted in limited impact on smoking prevalence in the EU. With few exceptions, post-ban survey responses mirrored the pre-ban counterparts.

The data indicates that  quit rates among adult menthol cigarette smokers were relatively low, at approximately 8% overall in the post-ban survey. Across the eight markets, an average of 40% of respondents indicated that they reduced their menthol cigarette consumption, but either continued or increased their consumption of non-menthol varieties. Nearly 20% surveyed switched to other menthol tobacco products not affected by the ban, with a majority having switched to e-cigarettes. 13% of respondents started buying menthol cigarettes from other sources; and another 13% began buying products to manually add a menthol flavor to regular tobacco products. In the post-ban survey, about one-quarter of respondents were not aware of the ban.

We are unable to draw conclusions on the ban’s deterrence relative to youth initiation of smoking, as the surveys polled current and recently quit menthol cigarette smokers at least 18 years of age, which is the legal smoking age in all countries surveyed.

Summary Results from the Pre- and Post-ban Surveys

The main deviations in the post-ban survey responses, compared with pre-ban intentions, were lower quit rates and higher use of products that allow the consumer to manually add a menthol flavor to regular tobacco products.

Responses varied by country and demographic factors. Quit rates were lowest in Poland, the UK, and Hungary. Poland and Hungary were the highest menthol consuming markets among the countries surveyed. Respondents in the same two countries also indicated the highest rate of buying from other sources (18%). Latvia and Sweden had the highest percentage of respondents indicating that they completely quit smoking, at 12% and 11%, respectively.

Overall, for those who switched to other menthol tobacco or nicotine products not affected by the ban, responses related to product prevalence. That is, respondents were more likely to switch to products that are commonly used in their country. On average, 57% indicated they switched to e-cigarettes. This tracks with the pre-ban survey, in which 57% of respondents who intended to switch also identified an intention to switch to e-cigarettes. The highest percentage of switching to e-cigarettes among switchers was observed in Poland (67%), followed by the UK (57%). The UK and Poland markets exhibit high vaping prevalence, relative to the other countries surveyed.

On average 12% of switchers indicated that they switched to nicotine replacement therapy (NRT) products. This response was most common in Finland (34%), which is the second largest NRT market by retail value sales among those surveyed. Finally, about 18% of switchers indicated they switched to smokeless tobacco products. Respondents in Sweden, the largest smokeless tobacco market among those surveyed, adhered to this average, marking a deviation from the prevalence trend observed in other product categories.

Q: You said you have switched to other menthol tobacco or nicotine products not affected by the recent ban. Which of the following products have you switched to since the ban?
Note: Multiple responses allowed

About 13% of the respondents indicated that they started buying menthol cigarettes from other sources, a trend that was consistent with pre-ban intentions. More than half of these respondents reported buying from friends or family who travelled to countries where menthol cigarettes are available. In both surveys, the second most common method of purchase identified was from online retailers that ship from other countries (post-ban 44%; pre-ban 51%).

An unexpected outcome of the post-ban survey was that a relatively large proportion (13%) of respondents indicated they started purchasing so-called “mentholizing” products. This products class includes menthol flavor cards, filter tips, capsule tubes, and sprays, all of which allow consumers to manually add a menthol flavor to regular tobacco products. Store checks and desk research indicate that these products are not typically produced by the tobacco companies. Still, manufacturers of alternative menthol tobacco products were keen to capitalize on the ban by highlighting, via advertising campaigns, that their products contained menthol but remained legal following the ban. 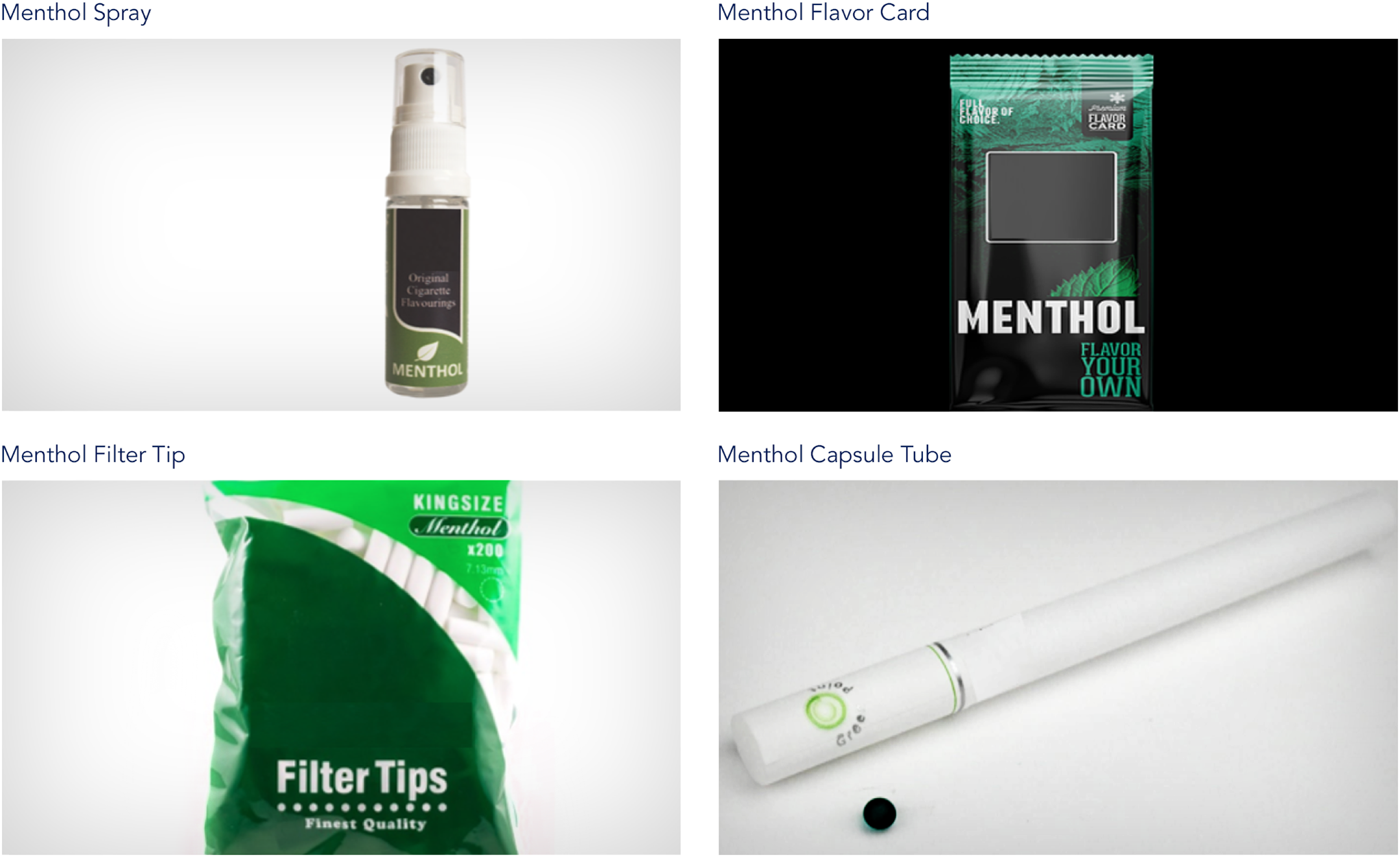 Similarly, a range of brands that were unaffected by the ban tailored their marketing messages to highlight the availability of their menthol variants. These brands included products like heated tobacco, e-liquids, e-cigarettes, nicotine gums and sprays, tobacco-free nicotine pouches, and snus, all of which were positioned as alternatives to menthol cigarettes. 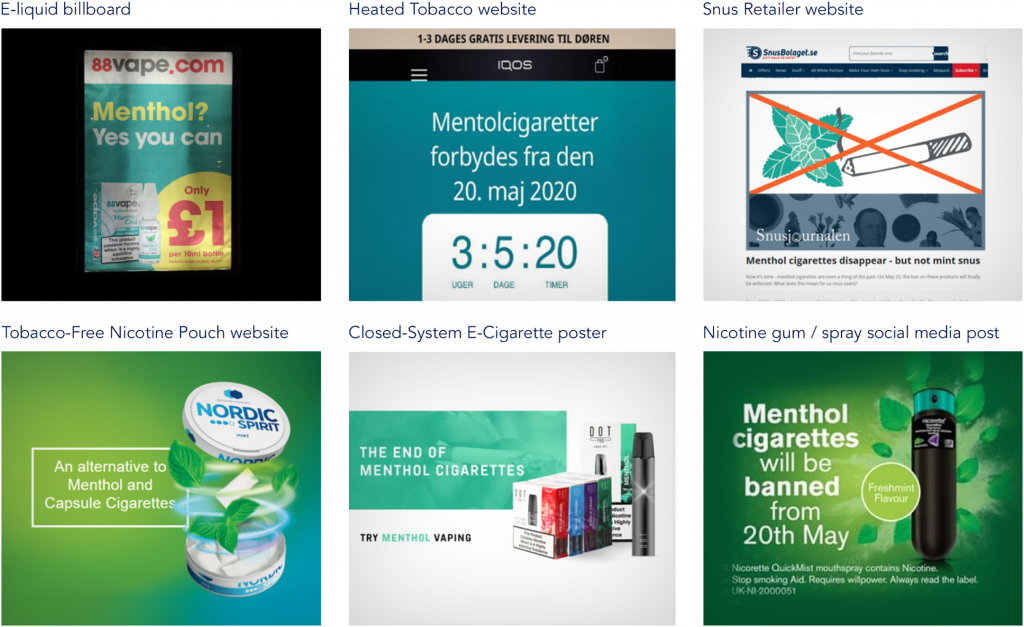 Regarding affordability, indexed pricing for alternatives versus pre-ban menthol cigarettes shows that in most countries e-liquids were the least expensive product. Where pre-ban menthol cigarettes were given the base score of 100, in seven of the eight markets under review, the relative pricing score was 20 or less for e-liquids. Denmark was the exception. The UK had the lowest pricing in that category, with an indexed score of 6—a finding consistent with the UK having the second highest rate of respondents switching to e-cigarettes. Poland, which had the greatest proportion of smokers switching to e-cigarettes, had the second lowest indexed pricing, with a score of 10.

On average, the use of flavor cards added a 10% premium relative to pre-ban menthol cigarette pricing. This does not appear to have presented a significant barrier to use among regular menthol cigarette smokers, although that may change with time. In Finland, the cost of a regular cigarette and a flavor card was comparable to pre-ban pricing of menthol cigarettes, due to the fact that menthol products were previously subjected to premium pricing. Cigarillos, however, appeared to be a more expensive option in six of the eight countries, and it is possible that smokers who switched initially may look for cheaper alternatives over the longer term.

A possible explanation for the relative lack of awareness is the proliferation of nicotine products that purport to offer the same menthol flavoring as banned products, potentially confusing consumers. New products launched in the United Kingdom included Imperial Brands L&B Blue New Crush and JPS Players New Crush. The New Crush variants are targeted at previous crushball consumers and include a filter “that delivers a cooling sensation during smoking.” Japan Tobacco International released new products including Camel Breeze in Sweden, for which the cigarette paper has a menthol polish.

In addition to new products, manufacturers introduced non-flavored cigarettes in packaging similar to that which was previously used for menthol cigarettes. The Philip Morris International Skjold and Marlboro brands in Denmark are examples of such packaging, with signage indicating “Same Product” and “No Menthol.” As such, it is possible that some consumers are buying regular cigarettes, mistakenly believing them to be menthol flavored.

The activities of tobacco companies subsequent to the ban were challenged in a number of instances. Japan Tobacco International, for example, received a fine from the Hungarian Competition authority regarding its LD brand for not conforming to the new legislation. In addition, British American Tobacco made a complaint to the Public Health Agency of Sweden, claiming that JTI’s Camel Breeze maintains the same characteristics as menthol cigarettes. 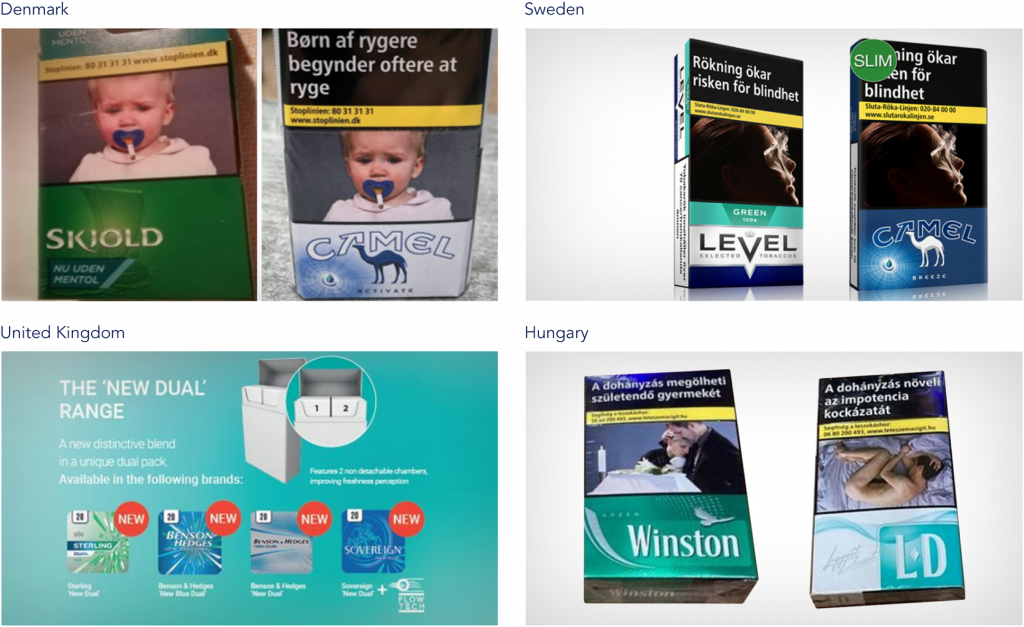 In the post-ban survey, more than 53% of all respondents indicated that COVID-19 has not impacted their consumption of tobacco or nicotine products—a finding similar to the pre-ban survey, in which nearly 55% reported the same. About 31% of post-ban survey respondents indicated that they have been consuming more tobacco or nicotine products than usual; 29% reported such an increase in the pre-ban survey. Of those increasing consumption during the pandemic, about 68% reported they have experienced an increased level of stress and anxiety due to the outbreak, in line with pre-ban survey levels.

Among the eight countries surveyed, the two largest tobacco-consuming markets are Poland and the UK. These two also exhibited the lowest quit rates of those surveyed and the highest percentage of switching to e-cigarettes (among switchers). Here, it is relevant to consider that Poland has historically exhibited the highest menthol cigarette prevalence within the EU. Further, both UK and Poland markets exhibit high vaping prevalence relative to the other countries surveyed.

Of course, important differences exist across the markets that could affect comparability (e.g., illicit trade, affordability, and public perception). For example, Table 1 shows that while smoking prevalence is declining in Poland, the country’s retail volume sales of cigarettes increased in 2019 versus 2018. This, we believe, can be attributed to higher frequency of consumption, enforcement against illicit trade, and relative affordability. And, in the US, e-cigarette sales declined in 2020 compared to 2019, following the EVALI outbreak and anti-vaping campaigns.

In Poland and the UK, post-ban surveys indicated relatively low quit rates among adult menthol smokers, at 4.5% and 6%, respectively.  On the whole, the impact of the EU menthol cigarette ban on smoking prevalence appears to be limited, although it is possible that benefits could materialize over the long run.  Further, we are unable to draw conclusions on the ban’s deterrence power relative to youth initiation of smoking.

The pre-ban and post-ban surveys inquired about: menthol cigarette consumption; ban awareness and perception; intentions and actual responses; and the impact of COVID-19. Pre-ban surveys were conducted from April 28 to May 19, 2020. Post-ban surveys were conducted from October 16 to November 15, 2020. Each survey polled more than 6,000 legal age (18 years and older) monthly consumers of menthol cigarettes, as well as in the post-ban survey users who recently quit. The eight countries selected for the surveys are markets with a relatively high share of menthol/capsule cigarettes. Research was conducted via online surveys and responses from consumer panels through a cross-sectional approach. Both surveys used a non-probability sampling technique. An online consumer panel was used as the sample frame. A new set of respondents was used for the post-ban survey compared to the pre-ban survey. Online consumer surveys were supplemented with store checks, desk research, company research, and trade discussions.

When referring to information on this website page, please use the following citation:
Foundation for a Smoke-Free World. “EU Menthol Ban Survey.” Retrieved (date).
(https://www.smokefreeworld.org/eu-menthol-cigarette-ban-survey-2/)