The first Tobacco Transformation Index® found that a small group of tobacco companies made public commitments to harm reduction, but none have shifted their focus enough to ensure the accelerated decline of cigarettes and other high-risk products. A review of recently published first-half 2021 reports from six of the major tobacco companies indicates that reduced-risk products* continue to form a limited, albeit growing, share of total revenue.

We assessed recently published first-half 2021 reports from Altria, British American Tobacco, Imperial Brands, Japan Tobacco, Philip Morris, and Swedish Match. With the exception of Swedish Match, each company continues to derive most of its total revenues from combustible products. As Table 1 illustrates, Swedish Match derives the largest share of its total revenues (66%) from non-combustible products, followed by Philip Morris (29%), British American Tobacco (12%), and Altria (12%). The Japan Tobacco and Imperial shares from non-combustibles are just 3% and 2%, respectively. In this respect, the ranking of companies by non-combustibles as a share of total revenues is broadly stable relative to the findings from the first publication of the Tobacco Transformation Index. The Index shows Swedish Match leading the Index overall and also leading on metrics related to share of reduced-risk versus high-risk products.

According to company reports, Swedish Match, Philip Morris, British American Tobacco, and to a lesser degree Altria have demonstrated increases in the share of non-combustible products of total revenue, when compared with figures reported for first-half 2019. Philip Morris, Swedish Match, and British American Tobacco showed the most progress in increasing their share of revenue derived from non-combustible products. Imperial Brands regressed by this measure, amid management and strategy changes. 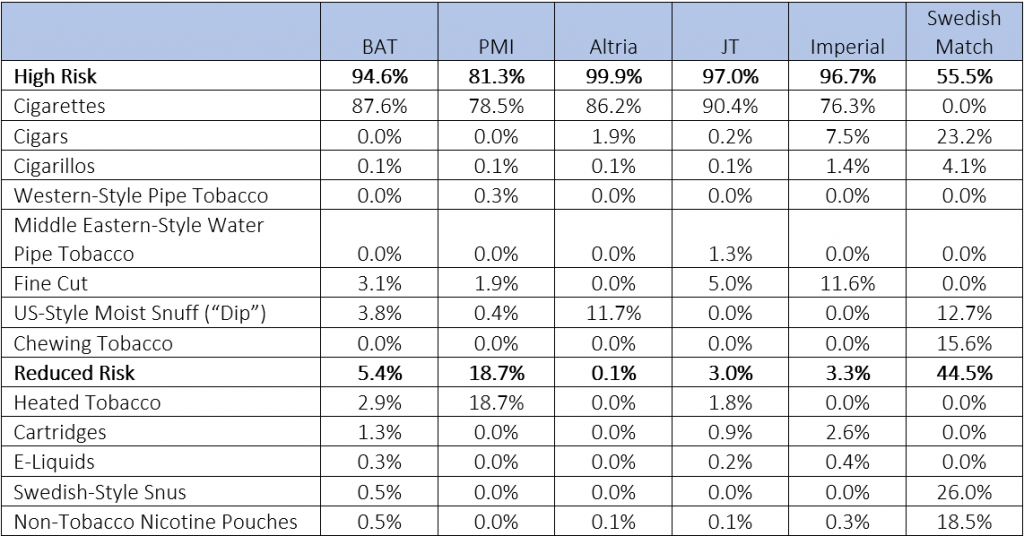 In the case of Swedish Match, the company’s non-combustible sales are driven by Swedish-style snus (through its General brand), followed by tobacco-free nicotine pouches (ZYN®). On September 14, Swedish Match announced that it intends to separate its cigar business via a spin-off to shareholders and to exit the manufacturing of combustible tobacco products. Philip Morris International’s growth in non-combustible revenue in H1 2021, compared with H1 2019, is primarily driven by its heated-tobacco brands IQOS (device) and HEETS™ (consumable). British American Tobacco’s growth in share of non-combustibles of total revenue is driven primarily by sales of e-vapor products and non-tobacco nicotine pouches. Vapor product sales are driven by Vype/Vuse brands, as well as Lyft/Velo nicotine pouch brands. Altria’s modestly increasing share of non-combustibles as a share of total revenue is made up predominantly by sales of US-style moist snuff, driven by its Copenhagen brand. Altria’s reported figures do not include its 35% ownership stake in JUUL, the manufacturer of closed system e-vapor products. JUUL generated retail sales of approximately USD 5.65 billion** in 2020.

On the other hand, Imperial Brands and Japan Tobacco did not make material progress over the period, as reflected by their shares of total revenue derived from non-combustible products. In the case of Imperial, e-vapor products (blu/myblu™ brands) constitute the company’s limited reduced-risk product sales. Japan Tobacco’s non-combustible figures exclude its international sales, where the company sells brands including Ploom™ tobacco heating devices, Logic™ e-liquids and cartridges, Nordic Spirit™ non-tobacco nicotine pouches, and LD™ Swedish-style Snus.

We believe the results demonstrate that the tobacco industry is not a monolith, but rather a group of individual companies with differing strategies, footprints, and degrees of operating prowess. Further, this analysis excludes the state-owned and privately held players that dominate cigarette sales in many parts of the world. The second Tobacco Transformation Index®, due to be published in the fall of 2022, will provide a further deep-dive assessment of tobacco companies’ commitments and actions as they relate to tobacco harm reduction. The aim of the Index research platform is to incentivize tobacco companies to act more quickly and responsibly than they otherwise would.

*Reduced-risk product definition based on Relative Risk Hierarchy (RRH) produced by Rachel Murkett et al, October 2020, based on a systematic review of the scientific literature and analysis of the best available evidence.

This article was updated on October 4th with clarifications regarding Japan Tobacco.