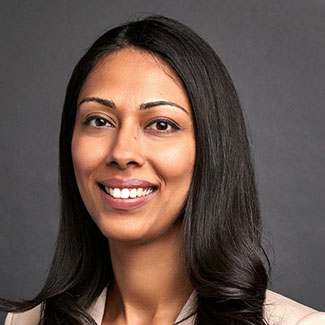 Romita oversees economic and policy analysis, research, programming, and partnerships in support of the Foundation’s mission. The cross-cutting nature of her role often requires building, managing, and leading teams pursuing high priority projects in low- and middle-income countries. In an earlier role at the Foundation, her work helped guide efforts to assist smallholder tobacco farmers in transitioning to alternative crops and livelihoods in heavily dependent tobacco economies.

Romita’s global experience in risk analysis and policy development includes roles at organizations in Singapore, India, and New York. Prior to joining the Foundation, she worked as a Senior Analyst at Control Risks and a Contributor at the Economist Intelligence Unit, providing in-region advisory services to corporates, international organizations, and governments with a focus on emerging markets. Romita also held positions at the Singapore government, the United Nations Association of Singapore, and General Electric.

Romita is based in New York and is fluent in several South Asian languages including Hindi and Bengali. She holds a Master of Science in South Asian Studies from the University of Oxford and a Bachelor of Arts with Honours in Political Science from the National University of Singapore.