In 2018, the World Health Organization (WHO) adopted the Global Strategy to Accelerate Tobacco Control 2019-2025 (GS2025). Described as “a blueprint for the global tobacco control community,” this strategy sought to accelerate implementation of the WHO Framework Convention on Tobacco Control (FCTC). Two years later, one cannot help but notice the absence of any report on progress toward this goal—an absence that was made all the more glaring when the WHO relaunched GS2025 last month. Intended to coincide with what would have been the Ninth Session of the Conference of the Parties to the FCTC (COP9), this relaunch only highlighted ongoing failures in policy implementation.

The GS2025 itself recognizes the uneven implementation of several FCTC articles. And the “WHO Report on the Global Tobacco Epidemic 2019: Offer to help quit tobacco use”  finds that only 23 nations have introduced comprehensive cessation programs, “even though in many countries, many tobacco users report wanting to quit.” These findings can be attributed to, among other things, inadequate funding and government inaction. For example, countries have hesitated to include nicotine replacement therapy on their National Essential Medicines Lists—a step that could make a tangible difference in cessation rates.  Likewise, many countries have resisted adoption of tobacco harm reduction (THR) strategies, despite evidence suggesting that such a move could substantially reduce death and disease caused by the use of toxic tobacco products.

Indeed, the WHO narrative on tobacco control excludes important progress in the area of THR, including:  the adoption of a THR approach in the United Kingdom; United States FDA authorization to market heated tobacco products and snus as “Modified Tobacco Risk Products”; and success stories from  countries that have used THR to decrease the smoking-related health burden, such as Japan and South Korea. These developments all occurred in the time since the GS2025 was initially released.

Of course, the outbreak of the coronavirus pandemic may have a role to play in the GS2025 reporting delay; however, now is not the time for the WHO or FCTC Secretariat to drop the ball. Rather, it is an opportunity to bolster and shift the lens through which the tobacco pandemic is viewed, and to make truly meaningful progress towards ending smoking in this generation.

Accelerating an end to smoking

A recent article by Derek Yach demonstrates the potential for a dramatic reduction in deaths from tobacco via measures that improve cessation and harm reduction support. The article highlights that, though there is general agreement that cessation is the fastest way to reduce tobacco deaths, FCTC implementation has tended to focus on articles with negligible impact on this outcome. Yach writes: “52% of the world is ‘covered’ with respect to pack warnings, which do little to reduce smoking rates. By contrast, the implementation of cessation assistance is quite weak. “ 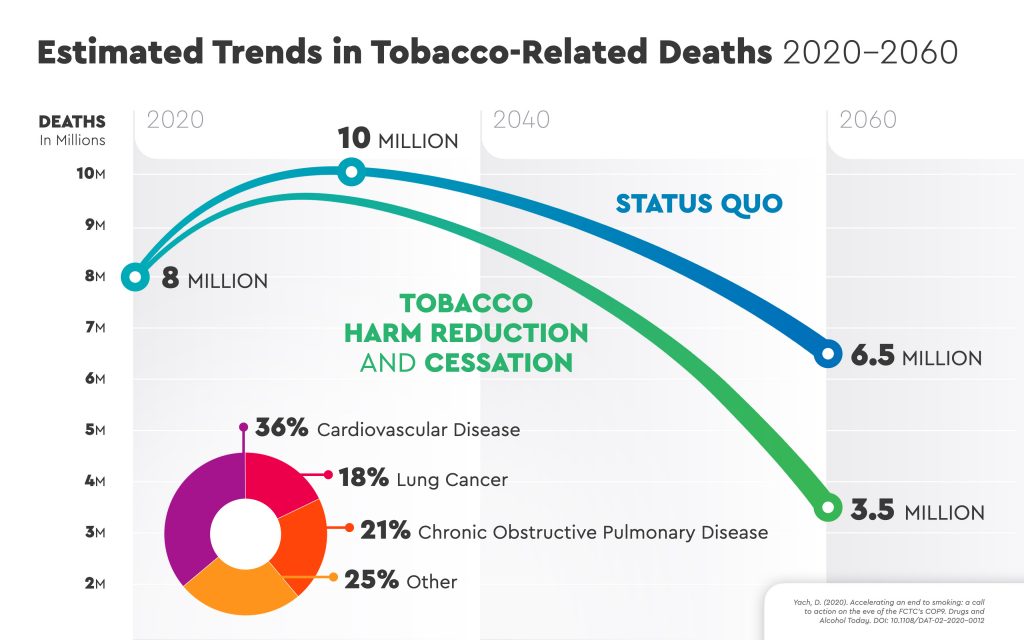 The article goes on to emphasize the value of new approaches to cessation, including THR. Such approaches, argues Yach, could save millions of lives by 2060, representing an unprecedented public health gain. Yet, again, the WHO has failed to afford this approach the attention and resources it warrants.

Though FCTC implementation has been slow, there is now an opportunity to disrupt this stagnation. Given the delay of COP9, we have an extra year in which to discuss high priority action areas in tobacco control. Yach has deftly defined some of these priorities (summarized below), which include filling critical gaps in knowledge and funding. Ahead of COP9, parties should further consider these priorities and develop evidence-based recommendations for the meeting next year.  We needn’t accept bureaucratic inaction; and, in fact, we have a moral imperative to demand change. 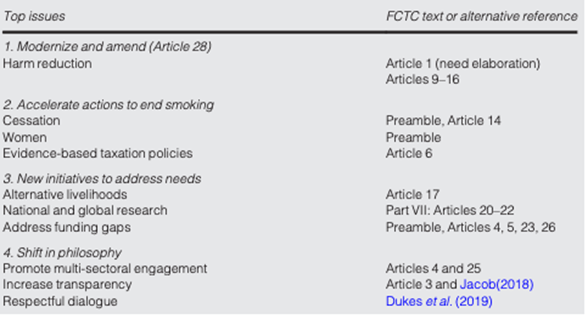 “In a globalized world where boundaries between countries are becoming less rigid every day, outcomes in one place can have a global impact. From this perspective, tobacco control is everyone’s business”