Facts and figures: e-cigarette risk perception and the US EVALI outbreak - Foundation for a Smoke-Free World

Facts and figures: e-cigarette risk perception and the US EVALI outbreak

Posted by Staff on Tuesday, May 12, 2020 in Public Health, Smoking Control, Blog

A recent working paper published by the National Bureau of Economic Research (NBER) explores how perceptions of e-cigarette risk changed during the e-cigarette, or vaping, product-use associated lung injury (EVALI) outbreak in the United States. This post explores available data regarding this topic. (To learn more about general conclusions from this data, please see Ayda Yurekli’s post here.)

According to this CDC graph, case reports and hospital admissions began as early as March and peaked in September of 2019. Using the Health Information National Trends Survey (HINTS) for the ‘before’ data points (2012–2019) and ten waves of Cornell- and NBER-sponsored Google Surveys from September 2019 through January 2020, the authors analyzed changes in perceptions of e-cigarette risks over the course of the outbreak. They were especially keen to understand whether those perceptions were influenced by initial non-specific warnings against all e-cigarettes, which were slowly replaced much later by messages targeting vape products containing tetrahydrocannabinol (THC). The authors discovered the following:

The Foundation for a Smoke-Free World’s (FSFW) global polls uncovered similar findings in 2017 and 2019. This poll revealed that:

Notably, FSFW’s 2019 survey was conducted in the summer, prior to the specification of THC-containing products; therefore, results may reflect the effects of the initial news and media warnings about e-cigarettes in general. 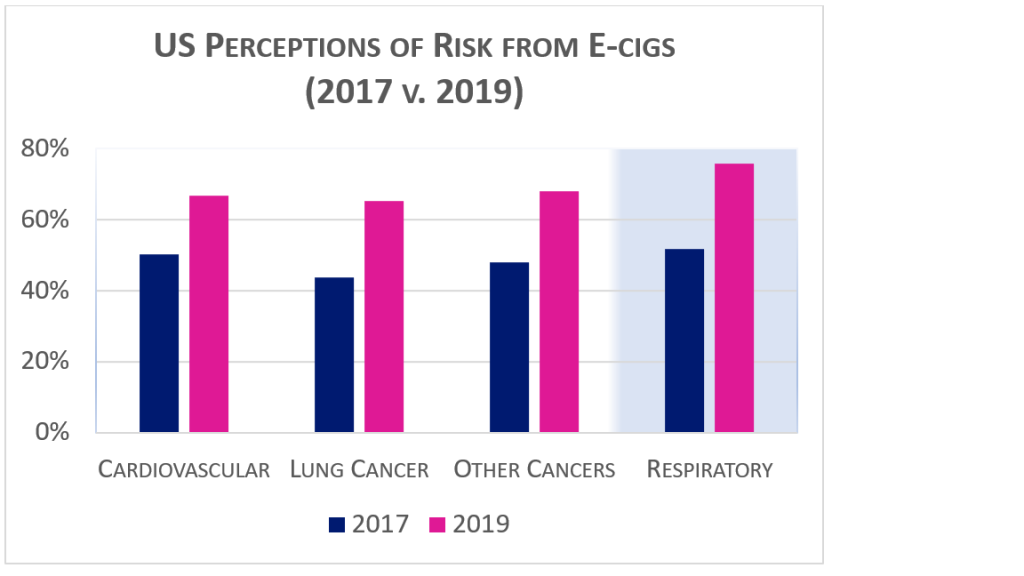 Although we likely have much to learn about the long-term effects of e-cigarettes, the current science suggests that their risk is much lower than that of combustible cigarettes. The EVALI outbreak is a clear example of the unintended consequences of a precautionary principle that urged smokers to stop using all e-cigarettes. The increase in the perceived risk of e-cigarettes could completely dissuade adult smokers from switching from cigarettes to reduced risk products like e-cigarettes. Additionally, it could slow the reduction in youth smoking rates.

Early detection systems that accurately determine specific drivers of harm are needed. Systems such as the CDC’s National Notifiable Diseases Surveillance System (NNDSS) which helps monitor, control, and prevent over 100 diseases, and more specifically, the EVALI early detection platform powered by Signals Analytics were built to provide such tools. Now, as the COVID-19 outbreak threatens our health on a global scale, we must do our best to take the lessons learned from the EVALI outbreak to separate fact from fiction and help protect lives, including our own.