The Foundation is sponsoring surveys of adult menthol cigarette smokers in several EU countries before and after the menthol cigarette ban. The pre-ban surveys queried awareness and intention to quit or switch. In light of COVID-19, the surveys also monitored behavioral changes among adult tobacco users as a result of the pandemic. The post-ban surveys will query actual behavior. 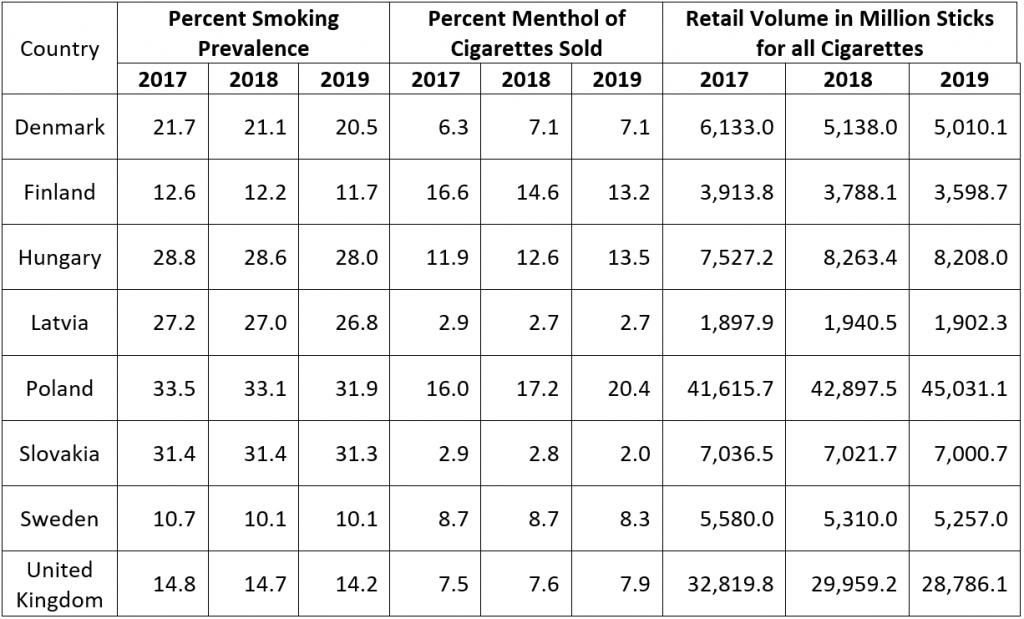 Summary results from the pre-ban survey. More than 6,000 menthol cigarette smokers were surveyed in eight countries during the three-week period leading up to the ban. Respondents consumed menthol cigarettes at least once per month over the prior 6 months.

Responses vary by country and a range of demographic factors encompassed by the survey. Overall, for those who intend to switch to other menthol tobacco or nicotine products not affected by the ban, 58% indicated they would switch to e-cigarettes, with the highest percentage observed in Poland (78%). About 12% of the respondents indicated they intend to start buying menthol cigarettes from other sources, with more than half of them indicating they would buy from friends/family travelling to countries where menthol cigarettes are available or from online retailers which ship from other countries.

Based on menthol cigarette prevalence and intended response, along with mixed indications relative to tobacco or nicotine consumption presented by COVID-19, as reflected by the pre-ban survey, the impact on smoking prevalence in the EU as a result of the menthol cigarette ban will likely be limited. Of course, the proof is in the pudding, as consumers change from intent to actual practice. In addition, outcomes will vary by country. The Foundation will sponsor a follow-on survey in the fall.