China could lead transformation of the tobacco sector

Posted by Yuchen Xue on Wednesday, May 26, 2021 in Innovation
中国或将引领烟草业的转型

When Chinese e-cigarette maker RELX Technology went public this January, its price quickly soared. Shares increased 145.92% on opening day, pushing the company’s value to 45.8 billion dollars. Then, in March, prices plunged more than 40% following the announcement of potential new regulations on China’s e-cigarette industry. Losses aside, the regulations can be understood as a good thing for the sector. Like the stock’s initial rally, the proposed restrictions reflect an understanding that e-cigarettes comprise an increasingly substantial component of China’s tobacco ecosystem.

The regulations would constitute a new clause in the Tobacco Patent Sales Law of the People’s Republic of China. Now in draft form, the clause calls for regulating e-cigarettes a manner comparable to combustible products. Though manufactures may not celebrate all aspects of the restrictions, the introduction of thoughtful policy could ultimately strengthen China’s e-cigarette sector. The new standards would, for instance, prevent youth uptake of e-cigarettes, resolve product quality issues, and refer to international regulatory practices.

Indeed, China is the world’s largest producer and consumer of tobacco products. The country manufactured 2.36 trillion combustible cigarette sticks in 2019, accounting for 44.7% of global production. Of the world’s 1.3 billion tobacco users, over 300 million are Chinese. Correspondingly, out of the 8 million deaths caused by tobacco each year, over 1 million occur in China. As such, smoking remains one of country’s largest public health threats; and the government has been taking steps to tackle this problem. For example, Healthy China 2030 establishes an ambitious strategy by which to reduce smoking rates from 27.7% in 2015 to 20% in 2030.

In parallel, other sectors are taking advantage of new clean technologies to improve public health and curb climate change. In the energy sector, this entails a shift from oil and coal to clean, efficient energy. In December of last year, the China State Council released the white paper, “Energy in China’s New Era,” which documents a 10.8% reduction in coal use since 2012 and identifies strategies for reducing consumption yet further. Also last year, President Xi announced that China is taking steps to achieve carbon neutrality by 2060. As part of this strategy, the government plans to phase out internal combustion engine vehicles (ICEV) by 2030.

Like the energy sector, the tobacco sector is on the cusp of a clean disruption. Here, innovation arrives in the form of harm reduction products (HRPs), including e-cigarettes, that could dramatically reduce death and disease from tobacco. Over time, combustible cigarettes, like ICEVs, could be phased out via adoption of this new generation of products.

One of the most popular HRPs worldwide, e-cigarettes were invented in China by the pharmacist Han Li. Originally a smoker himself, Li’s work emerged from a desire to stop using combustible tobacco. In 2003, he registered a patent for electronic cigarettes and, shortly thereafter, began selling the products through his company, Beijing Ruyan. By 2009, e-cigarettes were being sold across the world, with particular success in Europe and the United States. Since then, China has played a dominant role in the manufacture of novel nicotine technologies. Today, about 90% of the world’s vaping and e-cigarette devices are designed and manufactured in Shenzhen.

Two independent companies, SMOORE and RELX Technology, have proven particularly successful and should be recognized as global leaders in the sector. A supplier of vaping devices and components, SMOORE has applied for more than 1600 domestic and foreign patents, of which more than 700 have been granted. RELX Technology develops its own e-cigarette brands and has invested more than 20 million CNY to establish a lab devoted to product safety and innovation. According to the company’s 2019-2020 report, RELX has applied for 429 patents globally, 54% of which were invention patents. 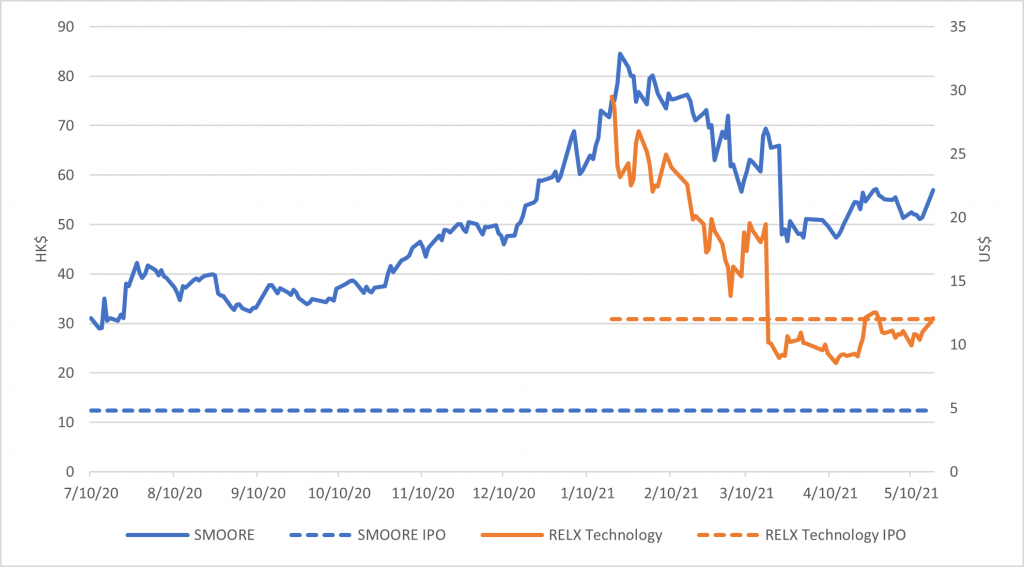 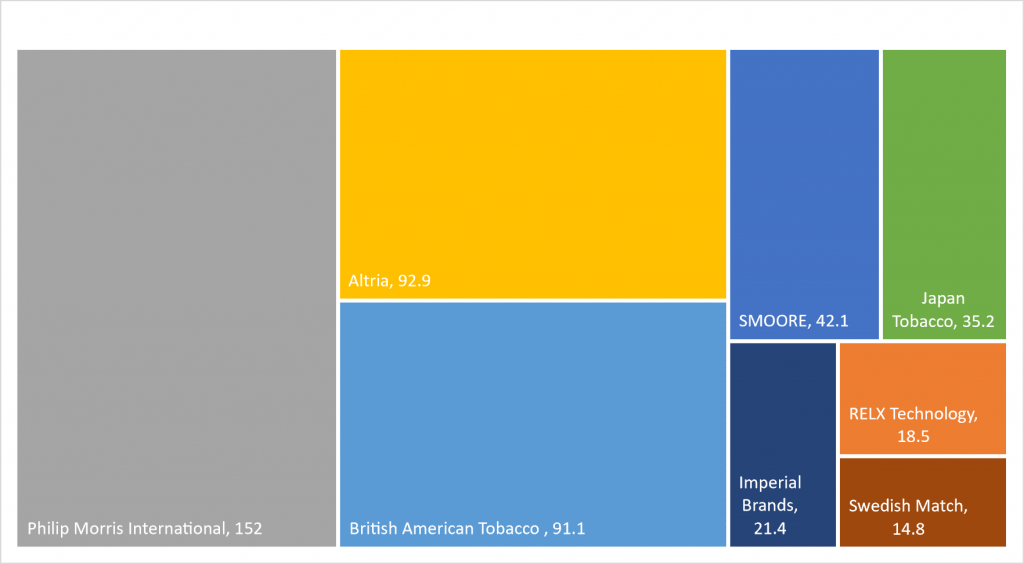 Given China’s prominence in this sector, the new regulatory clause represents a significant development in the global HRP ecosystem. The draft clause was developed  by two of China’s regulators, the Ministry of Industry and Information Technology (MIIT) and China National Tobacco Corporation (CNTC). MIIT constitutes a governmental regulatory agency that spans diverse industries; CNTC, which functions as both a regulatory agency and a state-owned tobacco monopoly, falls under the jurisdiction of MIIT. Both entities directly and indirectly control the China’s tobacco industry.

Among CNTC’s previous efforts to regulate the industry was a 2019 “Notice on Further Protecting Minors from Electronic Cigarettes.” In response to this notice, RELX launched “Project Sunflower,” which takes advantage of ID verification and facial recognition technologies to effectively prevent minors from accessing and purchasing e-cigarettes. The new clause would seek to further deter underage use, while protecting the interests of adult users.

As the HRP landscape evolves, policy can critically guide public understanding and use of these products. In recent years, misinformation regarding HRPs has led some smokers to overlook the benefits of switching. Many smokers, for instance, falsely believe that e-cigarettes are equally or more harmful than combustibles—a view that reinforces the status quo. Moving forward, public policy can be leveraged to correct these misperceptions and nudge smokers away from their deadly habit. For instance, regulations surrounding taxes, advertisement, and accessibility should reflect the relative risk of tobacco products. In such a scenario, combustible products would cost more and be less accessible than e-cigarettes—thus encouraging users to switch from cigarettes to HRPs. This type of policy, if adopted on a national scale, could massively improve public health in China.

In addition to enhancing the country’s health, such a shift aligns with smokers’ desires. According to the 2020 Insight Survey by Foundation for a Smoke-Free World, 88% of daily cigarette smokers in China want to reduce smoking. This trend, coupled with China’s prominence in manufacturing novel nicotine technologies, suggest that the country is well positioned to lead the shift away from combustible cigarettes.

Of course, efforts to phase out cigarettes extend beyond China. According to the Tobacco Transformation Index, large international tobacco companies (e.g., Swedish Match AB and Phillip Morris International Inc[PMI]) are transitioning to HRPs via heavy investment in the development of new products. Swedish Match initiated such a shift in 1996; now, the company’s smoke-free portfolio accounts for over 70% of its operating profit. Similarly, according to a 2020 PMI report, almost one quarter of the company’s revenue comes from its heated tobacco product, IQOs. Today, nearly 18 million people use IQOS worldwide; and 70% of users have completely stopped using combustible products. Considering that capital increasingly lies outside of the combustible market, China’s investment in HRPs can be seen as both a public health win and a sound business decision.

President Xi, addressing the World Economic Forum on Jan 25th, 2021, stated: “China will continue to advance science, technology and innovation. Science, technology and innovation is a key engine for human progress, a powerful weapon in tackling many global challenges.” Applied to the tobacco sector, this drive toward innovation could have profound consequences. Via continued research, as well as partnerships between CNTC and e-cigarette manufacturers, China could displace cigarettes across its vast monopoly. In doing so, the country would lead transformation within the tobacco industry, dramatically improving public health in China and beyond.