the case for femtech: prospects for addressing tobacco use in india - Foundation for a Smoke-Free World

the case for femtech: prospects for addressing tobacco use in india

Posted by alexandra "allie" solomon on Sunday, September 8, 2019 in Research

Globally, healthcare products are often developed without taking into consideration sex- and gender-based physiological and psychological differences. Male domination in science, medicine, and technology has led to the overrepresentation of men in clinical trials, a lack of gender-specific medical guidelines, and limited innovation in health-related technologies tailored to women’s needs.

The impact of these oversights is particularly evident in India, where just 13.9% of researchers are women. Indian women are much less likely than men to receive adequate medical care – a disparity often compounded by other factors affecting healthcare access, such as geography and socioeconomic status.

As digital innovations transform the healthcare landscape, researchers and technologists are beginning to develop solutions that address gender inequities. Femtech, or female technology, refers to a category of products and services that recognize medical needs specific to women. Inclusive of software, diagnostic tools, and technology-driven services, Femtech can play a key role in making healthcare more accessible and affordable to women.

The Femtech market has grown substantially, receiving nearly $1 billion in funding over the last three years. This trend is attributable to multiple factors, including the development of differentiated digital applications and new partnership opportunities that can expand the consumer base.

The Femtech sector is currently concentrated in maternal health, family planning, and fertility. This focus, while important, does not address other urgent health needs of women in low- and middle-income countries. According to the Global Health Data Exchange, in 2017 female deaths in India were much more likely to be caused by non-communicable diseases (NCDs) than by communicable, maternal, neonatal and nutritional diseases (62.47% and 29.19%, respectively). 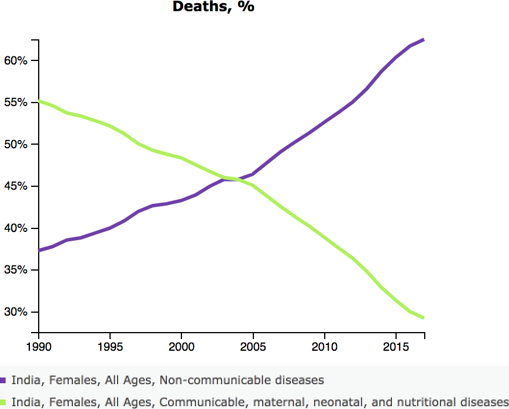 A major risk factor for developing NCDs is the use of tobacco. According to the second Global Adult Tobacco Survey (GATS-2), 14.2% of women and 42.4% of men aged 15 or older use tobacco. There are parts of India, though, where use well exceeds the national average. In Mizoram and Tripura, for example, women’s tobacco use reportedly exceeds 50%. Several studies suggest that tobacco use prevalence among pregnant women does not vary greatly, if at all, from that of nonpregnant women in India. It is important to note that the prevalence of women’s tobacco use in India may be underrepresented in studies and surveys due to societal taboo and women’s reluctance to self-report use.

Traditional values do not favor smoking by women. They are, thus, more likely to consume tobacco in smokeless forms. Awareness of the hazards associated with these products is low in rural populations. In fact, many women believe that tobacco has medicinal properties for dental hygiene, curing toothaches, and controlling morning sickness and labor pains during pregnancy.

Though smoking among women is generally frowned upon, in some urban areas the habit may be viewed as a symbol of emancipation and modernity. There are also several regions in India where the prevalence of smoking among women has historically been relatively high. In Andhra Pradesh and Orissa, for example, women smoke cheroots (cigars, also called chutta) in a reverse manner (i.e. with the burning end inside the mouth); and in some northern parts of the country, many women smoke hookah.

Percent Distribution of Women by Tobacco Use Status:

Figure from the Global Adult Tobacco Survey, Second Round.

The Future is Femtech

Women’s NCD-related death and illnesses are on the rise in India, and many women lack access to effective treatment and preventative measures, such as tobacco harm reduction and cessation. Those living in rural areas and other low-resource settings are at a particular disadvantage, the situation worsening with increasing distance from hospitals and health clinics. There is both a clear public health imperative and a growing market to develop solutions tailored to women’s needs that can treat, empower, and educate them, and expand their access to healthcare on a national scale.

Femtech related to tobacco harm reduction and cessation could accelerate progress in many ways, including: