Buck Duke, roller skates, and cigarettes - how one machine transformed an entire industry - Foundation for a Smoke-Free World

Buck Duke, roller skates, and cigarettes – how one machine transformed an entire industry

“Buck Duke will not be forgotten, a debt he owes in part to other forgotten men, ones not so adept at the American art of transformation by dint of desire.” 1

James Buchanan (Buck) Duke founded Duke University after a career spent revolutionizing the American tobacco industry. He famously created and then dominated the cigarette market, a feat many attribute to his eccentric advertising.2 When roller skating rinks became a fad in the mid-1880s, Duke sponsored the “Cross Cut Polo Club of Durham, N.C.” — a team of men who played polo on roller skates to sell Cross Cut cigarettes in grueling matches that stoked national resentment. “In Cincinnati where the ‘Cross Cuts’ played in a leading rink, the match took on an aspect of the South once more ‘battling against the North for the honors of the hour.’ Headlines in newspapers and handbills played up the ‘desperate battle between the North and South’ as they also advanced the interests of W. Duke, Sons and Company.”3

Beyond avant garde marketing campaigns, Duke would go on to secure his monopolistic hold on the early American tobacco industry with near-exclusive rights to the first viable cigarette-rolling machine. In 1875, Richmond’s Allen and Ginter tobacco company sponsored a $75,000 award for a functional machine that could roll cigarettes. James Albert Bonsack, son of a Virginian textile-mill owner, decided to give it a go. At the age of 16, he borrowed initial capital from friends — and fifty dollars from his grandmother. He later dropped out of Roanoke College to fully dedicate himself to inventing. Bonsack set up shop in his father’s mill, used its “water-driven shaft” for power, and collaborated with his brother John on a design inspired by wool carding machines.4 The Bonsack Cigarette Making Machine was first patented in 1880, with subsequent patents reflecting technical improvements in the years to follow.

Between 1878 and 1890, Duke “catapulted himself from president of a modest smoking-tobacco factory into a position as chief executive of a tobacco manufacturing trust that controlled 90 percent of the rapidly expanding cigarette sales in the United States.”5 Duke recognized that his company couldn’t compete with established smoking tobacco brands like Bull Durham, so he took a chance on the less-established cigarette market. In 1884, he made a deal with Bonsack that the Bonsack Machine Company would forever lease its machines to Duke at 25% below the rate they charged his competitors.6 Duke’s mechanics improved the machines, and Duke invested in Bonsack’s company at a time when most people believed that machine-rolled cigarettes were lower quality than those rolled by hand. In 1876, Duke’s “labor costs were about 96 cents per thousand; by 1895, labor costs for the same cigarette were slightly over 8 cents per thousand.”7

Bonsack’s company dissolved over the next decade, following patent disputes and corporate tectonics. But Duke’s career was only beginning. He set up a factory in New York City, where he installed four Bonsack machines. “He knew he’d found gold in the rapidly industrializing city overflowing with immigrants, where relief from the factory floor and from the chaos of the tenements came in only brief moments, moments perfectly suited to the quick, narcotic jolt of a cigarette taken on the sly and now available at the low, low price of a nickel a pack.”8 Within a few years of acquiring Bonsack machines, Duke made cigarette brands like Cameos and Cross Cuts into some of the cheapest and most popular brands in the country. In 1890, he was elected president of the monolithic American Tobacco Company, “one of the first giant holding companies in American industry.”9

Duke employed legions of immigrants, women, and children to hand roll cigarettes before and after his adoption of the Bonsack machine. 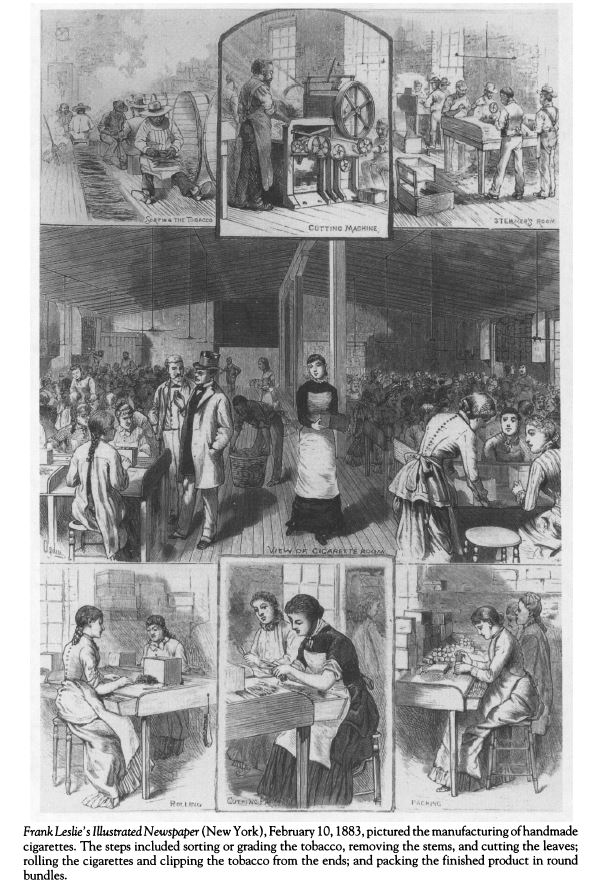 Accounts of the conditions that cigarette rollers of the time experienced, and the nature of the work itself, are often alarming. In 1883, the Richmond tobacco company of Allen and Ginter employed 450 girls, all “numbered” and seated beside “a tin can numbered to correspond.”10 Although Duke’s commitment to the American dream of mass production did in part lessen the burden many of these vulnerable workers faced in the United States, the conditions faced by individuals who roll cigarettes by hand have still not improved.

The Indian beedi industry currently employs over 7 million women with limited economic means who roll cigarettes by hand in their homes. A new study reported that “at least 92.5% [of] women workers reported suffering from bronchitis, 90.5% from body ache, 80% had lower back pain, 75% felt weak, and 77% had breathing difficulty.” New studies and legislators will continue their call for action to reform this exploitative industry. As we work towards a smoke-free future, it is valuable to reconsider the history of the tobacco industry. The revolutionary mind of a young Virginian teenager revolutionized an industry centuries ago, and it is that same inventiveness and determination that will steer us towards a brighter, healthier, future.