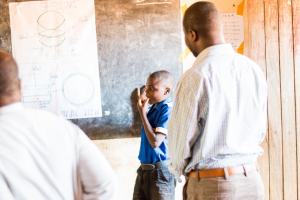 Many experts are quick to point out that the agriculture sector in Malawi faces challenges. At a time when global population is rising rapidly and the adoption of modern diets is increasing swiftly, experts project that the demand for food will double over the next three decades—and that food production is unlikely to keep pace. As evidence, they point to the fact that the productivity of existing agricultural land, as measured by crop yield, is rising far too slowly to meet demand.

And yet, as the scenes like the one above—in which a young and precocious Malawian boy shared solutions to the day-to-day agricultural challenges faced by his community—unfolded ahead of and at the Agricultural Transformation Summit hosted by the Foundation for a Smoke-Free World in Lilongwe, I could not help but feel as though they amounted to important counterpoint to the dire predictions of such experts. In doing so, the summit brought three recurring themes into sharp relief.

First, the summit suggested that science, technology, and innovation will play a critical role in helping the agricultural sector in Malawi overcome its challenges. At present, the majority of farming in Malawi is done by smallholder farmers who own less than one hectare in landholdings. The economies of scale required to achieve the highest levels of productivity are simply out of reach for these smallholder farmers. If, as the adage goes, necessity is the mother of invention, then nowhere doess appear to be of greater need for invention than on these smallholder farms.

Second, students across Malawi are able, ready, and willing to do their part in using science and technology to overcome agricultural challenges. For instance, one of the highlights of the summit, the AgTech Challenge, brought together young students across Malawi to propose inclusive solutions to the day-to-day problems faced by smallholder farmers. Over the course of this event, teams of enthusiastic students presented a number of compelling prototypes, including how bicycle wheels could be modified to quickly shell groundnuts and how farming equipment could be transformed into a handheld device to swiftly scoop up groundnuts. Many took their inspiration from William Kamkwamba who was a mentor to the students throughout the competition and an innovator himself. Years ago, Kamkwamba built a wind-powered irrigation pump to help his village maintain its crop in spite of a devastating drought—a story made famous by a book and film, titled The Boy Who Harnessed the Wind, which serve as a reminder that, as Kamkwamba said, “talent is universal, but opportunity is not.”

Third, the summit confirmed that there is important work being done across Malawi to help bring opportunities to talented students. The Foundation’s initiative is just one example of this kind of effort. Equally if not more inspiring is the work is being done by Dr. Address Malata, the Vice Chancellor of the Malawi University of Science and Technology, who is a firm believer that “science is the only way for Malawi.” Moreover, she is deeply committed to ensuring that opportunities for students to deploy science and technology are extended to men and women alike. After all, it was such opportunities that made her own story possible—the story of a young girl who, despite being discouraged from science because it was the purview of boys, rose to its highest ranks. Through her work, she hopes that it will prove to be just one of many, many more such stories.

If scenes like the one above are any indication, we have good reason to believe that it will be so.