A Lens on Smoking, Noncommunicable Diseases, and Social Injustice - Foundation for a Smoke-Free World

A Lens on Smoking, Noncommunicable Diseases, and Social Injustice 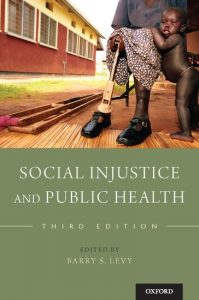 Smoking is a major behavioral risk factor common to all four major noncommunicable diseases (NCDs)—namely, cardiovascular disease (CVD), cancer, diabetes, and chronic respiratory diseases. Approximately 80% of the world’s 1.1 billion smokers live in low- and middle-income countries (LMICs); and NCDs are estimated to cause more than two-thirds of all deaths in developing countries. This socioeconomic gradient in morbidity and mortality for NCDs is attributed, in part, to smoking. Despite these jarring figures, research on smoking cessation interventions remains limited in LMICs. We discussed these issues and the link between smoking, NCDs, and social injustice in a recently-published book, Social Injustice and Public Health.

The book, to which several public health experts contributed, examines the sources and health consequences of social injustice and how to reduce them. It underscores, among other things, how inequalities in health mirror those in society. Barry Levy, the editor, provides two definitions of social injustice: (1) The violation of human rights for specific populations based on a perception of inferiority among those with more power or influence; and (2) policies or actions that negatively affect the conditions in which people can thrive. Conversely, social justice entails equity and fairness, and is associated with decreases in preventable disease and premature death.

Article 25 of Resolution 217, referred to as the Universal Declaration of Human Rights, which was adopted by the United Nations back in 1948, states that: “Everyone has the right to a standard of living adequate for the health and well-being of himself and of his family.” The protection of human rights through international and national laws is explored by Henry A. Freedman and Martha F. Davis in Chapter 26 of the book. Social justice and public health both aim to minimize preventable disease and premature death through the improvement of health equity.

Poor health outcomes may result from behavioral risk factors, such as alcohol consumption, physical inactivity, and poor diet. However, the leading cause of both premature death and preventable disease at a global scale is smoking (Chapter 20). Michael Marmot and Ruth Bell indicate in Chapter 2 that people of low socioeconomic status (SES) tend to smoke at higher rates. Relatedly, in chapter 15 we indicate that “since [smoking] is more prevalent among people of low [SES], it contributes substantially to the socioeconomic gradient in morbidity and mortality for NCD.” Smoking, we note, exacerbates social inequalities in health, leading to high rates of smoking-related adverse health outcomes in people of low SES, particularly as related to NCDs.

Social injustice affects not only people of low SES, but also women. As Gina Morato describes in chapter 4, “Women continue to lag behind men in… health and survival.” The elimination of gender discrimination in public health has seen little progress; and this neglect also pertains to the diagnosis and management of NCDs (chapter 15). Smoking increases the risk of CVD by 100%, and the World Heart Federation also states that women smokers are at a higher risk of heart attack than men smokers. The Lancet Commission on women and CVD calls for gender-specific interventions, and we urgently echo this call. A review article addressing the relationship between smoking, smoking cessation, and gender inequality underscored the need for appreciation of the social and cultural context of women’s tobacco use. The authors emphasized the importance of “including components that comprehensively address gender-related influences” and of “promoting gender equity and healthy gender norms, roles and relations” in smoking cessation interventions.  Young women also have a higher incidence of lung cancer than young men, albeit not solely due to smoking. Moreover, lung cancer rates have declined at a slower rate in women than in men—23% versus 48%, respectively, from 1990 to 2016.

The negative effects of social injustice and smoking are also reflected in vulnerable subpopulations, including the LGBTQ+ community and indigenous people. Indigenous peoples suffer from a higher burden of smoking-related disease and require more tailored smoking cessation and THR interventions. In addition to smoking-associated diseases, HIV/AIDS is a major health issue for many in these communities, as described by Emilia Lombardi and Talia Bettcher (Chapter 7). HIV/AIDS is disproportionately more prevalent in these populations than among non-LGBTQ+ and non-indigenous counterparts.

Comprehensive health justice entails not just attention to vulnerable populations within a country, but also to disparities between countries. With limited access to early detection and treatment, as well as lagging declines in smoking prevalence, LMICs are not seeing the same reductions in cancer-associated deaths that have transpired in more developed regions (Chapter 15). Further, Myron Allukian Jr. and Alice Horowitz emphasize a link between social injustice and oral health, particularly in LMICs and among low SES groups in high-income countries. They also note that poor oral health, including oral cancer, is associated with tobacco use.

Notably, while we agree with these authors on their assessment of the association between poor oral health and tobacco products, we do not share their views on products like vaping devices being a gateway to smoking. Several studies suggest that e-cigarettes may be a “gateway from smoking,” rather than “to smoking.” Results from a recent study also point to the superior effectiveness of THR products as smoking cessation tools, relative to nicotine replacement therapy (NRT), when accompanied by behavioral support.

Chronic obstructive pulmonary disease (COPD) is another NCD that is mainly caused by smoking, in addition to other causal elements such as environmental and occupational risk factors (Chapter 15). COPD is more prevalent among those of lower SES, and COPD-related deaths are highest in lower-income countries. Results from a study on smokers with COPD suggest health benefits upon switching from combustible cigarettes to e-cigarettes.

In Chapter 16, Carles Muntaner et al. discuss social injustice and mental health. Smoking prevalence is higher in people who suffer from mental health disorders than in the general population and is inversely correlated with SES. In the US, 40% of all cigarettes smoked by adults are consumed by people with mental illness.

Larry Brown explores the association between poor nutrition in vulnerable populations, social injustice, and poverty (Chapter 14). Agricultural diversification from tobacco is critical for tobacco farmers, businesses, and policymakers. Such a transformation is important to counter the decreasing demand for tobacco leaf, raise incomes, and improve nutrition, particularly in LMICs with tobacco-dependent economies.

The Foundation is working relentlessly to help not only smokers but also smallholder tobacco farmers, for instance via our Agricultural Transformation Initiative (ATI). Our goal is to decrease the rates of smoking-related morbidity and mortality and to help LMICs that are economically dependent on tobacco. Our work reflects many valuable points raised by Nancy Krieger in Chapter 16, particularly the need for comprehensive and collaborative research that unites public and private sponsors to fund multidisciplinary research to improve health outcomes and reduce health inequities and social injustice.

Part IV of the book, “An Agenda for Action,” describes many initiatives that are comparable to those supported by the Foundation, such as training health workers and researching “new insights and innovative solutions to health problems.” Overall, the efforts of the Foundation touch upon a plethora of issues highlighted in this book and aim to find and implement innovative solutions. 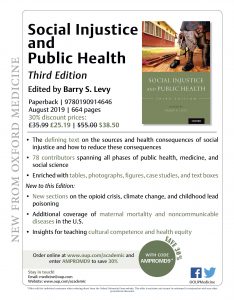 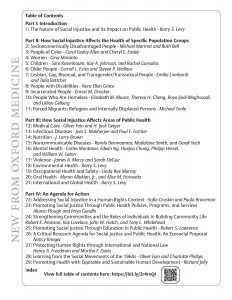